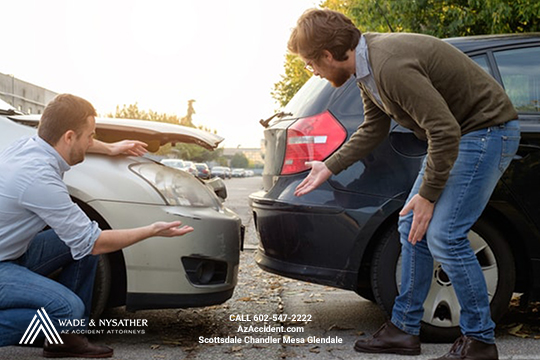 What Happens If I’m at Fault in a Car Accident?

What would happen if you caused someone else harm or injury in a car accident? Would they sue you? How much compensation would you receive?

The answers depend on several factors: who was driving the vehicle, where the accident occurred, and whether anyone was injured.

Find out in this article what happens if you’re at fault in a car accident.

Laws on personal injury lawsuits and vehicle damage vary depending if you live in a ‘fault’ or ‘no fault’ state.

In a no-fault state, all drivers are responsible for costs and legal consequences regarding auto accidents. If there is an accident, then both parties’ insurers may be held liable for any injuries.

In a fault state like Arizona, by contrast, the insurer of the person who caused the accident is responsible for any damage done.

If you’re at fault in an auto accident and live in Arizona, you (or, often, your car insurance) will likely be held financially responsible for the damages of everyone else involved in the accident. This includes passengers, pedestrians, bicyclists, and even animals.

The good news is that there are ways to lessen the financial impact of any accident that you could be responsible for.

So What Does Being ‘At Fault’ Actually Mean?

In most states, drivers are considered at fault if they disobey traffic laws, such as driving too fast, running red lights or stop signs, or following another vehicle too closely.

Drivers are also at fault if they cause accidents because of unsafe driving practices, like driving drunk or distracted.

The law defines negligence as an action that unreasonably causes a risk of injury to others.

For example, if you drive while texting, this could be considered negligent behavior. Of course, negligence isn’t always illegal, but it’s often enough to hold you accountable for causing an accident.

How can I determine if I’m at fault?

When trying to determine who was at fault for an accident, the first thing you should look at is whether or not the driver who caused the collision was at an unsafely high rate of speed.

Next, take a glance at the state of the road. Do you think the weather played a role in the accident? The streets appeared to be either damp or icy. Have you encountered any debris or potholes on the road?

You could be held accountable if you were driving through a hazardous location when an accident occurred.

What if I was partly at fault?

Even if you contributed to the cause of the disaster in some way, there is still a chance that you will not be found fully accountable for it.

Instead, you will be assigned a percentage of blame proportional to the amount you were liable for the accident.

Despite this, there is still a chance that you can pursue legal action against the other person, even if it is too late to do so.

The amount of money the court will hold each party responsible for paying will be set by the judge.

What if I don’t want to admit fault?

The cause of a road accident can be ambiguous, and under some circumstances, you may not wish to admit fault immediately.

However, you could lose your license if you refuse to admit fault. And even if you’re not convicted of a crime, you could face fines and points on your record.

What if I’m not sure?

At times, it might be challenging to establish who was at blame in a motor vehicle collision.

The sole information in the police report may be that someone else hit you from behind. Or maybe you noticed the other driver only moments before the collision.

In these circumstances, you can submit a claim to both parties’ insurance companies and sue each of them for damages.

This indicates that you will receive financial compensation from their policies to compensate for your medical expenses, wages lost, the cost of repairs, and pain and suffering.

Possible Consequences of Being Found at Fault in an Accident

In the event that you are determined to be the fault party, you may be subject to various punishments and fines.

You could potentially lose your license. In addition, your insurance premiums can go up depending on how much you are responsible for in terms of damages.

Furthermore, if the accident causes injuries to other people, you may be held financially accountable for their medical expenses.

Loss of license after a car accident

Following a severe collision, you run the risk of having your driver’s license revoked.

Your driver’s license could be revoked if, for instance, the judge determined that you were speeding or were careless in some other way.

It is essential to remember that this does not necessarily imply that you will never get behind the wheel of a car again.

It’s still possible for some individuals to get back to work and maintain their driving privileges without having their licenses suspended.

However, if you are found guilty of driving recklessly, you risk having your license revoked permanently.

In the state of Arizona, the at-fault driver can face hefty fines for certain types of offenses, including reckless driving, speeding, failing to yield right of way, and following too closely.

You could also face jail time for some violations. For example, you could spend up to six months behind bars if you’re convicted of DUI (driving under the influence).

Insurance rates could go up

You could end up paying higher insurance premiums if you’re found to be at fault in a crash.

Auto insurance companies use many factors to determine your rate, including your age, gender, marital status, location, type of vehicle, and history of insurance claims.

They may also consider your previous driving record, credit score, and whether you’ve been involved in previous crashes.

How to Limit the Damage

Even where it has been determined that you were legally at fault for a car accident, you can do several things after an accident to help make the best of a situation.

Claiming compensation from your insurer

Even if you caused the car accident that caused your injuries and damages, you might still be entitled to financial compensation for those losses.

This compensation consists of pain and suffering, property damage, car repairs, medical expenditures, and lost pay, among other things.

However, the things that you can claim are subject to certain restrictions.

First, you must have a valid proof of the losses caused in the accident, whether to you, other injury victims, or property.

Your insurer won’t automatically reimburse you for everything you’ve spent on a repair job. Instead, they’ll want to know how much money you paid out of pocket and whether you had to borrow money to make the repairs.

Second, you must be covered by insurance. Most states require motorists to carry liability insurance.

It protects you against financial loss due to injury or death caused by another driver’s negligence. Collision insurance covers your vehicle and personal belongings inside it.

Finally, you must file a claim within the statute of limitations period. In Arizona, the time limit is two years from the date the accident took place.

Personal injury protection (PIP) insurance is required by law in most states. These protections include reimbursement for medical bills, lost wages, and payment for final expenses.

Additionally, collision coverage, which pays for repairs to a vehicle after it has been damaged in an accident, is required by the laws of several jurisdictions.

Within the first thirty days after obtaining the policy, they are required to give their insurance provider a written notification.

Your personal injury protection (PIP) insurance will not take into account your level of responsibility in determining benefits if you are 100% guilty of an accident (or over 50% responsible in a jurisdiction that uses modified comparative fault).

In other words, you will still be compensated for the injuries you received due to the accident.

In addition, you may be entitled to compensation for your medical expenses, lost wages, expenditures associated with rehabilitation, and pain and suffering.

If you’ve experienced a car accident, regardless of whether you’ve already been found at fault or disputing the other driver’s claims, contact an experienced attorney today.

An attorney can provide advice about your rights and options under the law, including filing a compensation claim.

It would help if you also considered hiring an independent adjuster specializing in auto accidents.

The adjuster will review all aspects of the case, including the facts surrounding the crash, the extent of your injuries, and any applicable policies. He or she will then recommend what course of action to pursue.

If you hire an attorney, he or she will likely work alongside the adjuster.

With over 25 years of experience representing claimants after accidents in Arizona, we’ll be able to give you the best possible advice to match your personal situation. Contact us now!