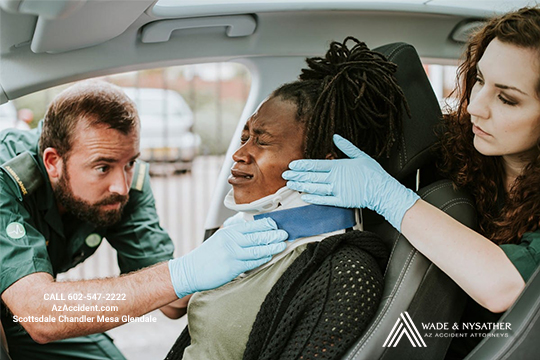 Classifications of Serious Injuries After an Accident

What should I look out for after an accident, and what injuries should I expect? How serious are they, and how can I tell the difference?

An injury is a damage or harm to the body caused by external forces such as trauma, disease, or other causes. Whether an injury is severe varies based on its location, type, and cause.

Whiplash occurs when the neck jerks forward and backward rapidly, causing damage to ligaments and muscles.

If you experience whiplash symptoms following a car accident, it is important to seek medical attention immediately. In addition, you may require physical therapy to help speed up recovery.

What Is a Traumatic Brain Injury (TBI)?

Traumatic brain injuries (TBIs) occur when there are rapid acceleration/deceleration forces applied to the head. These forces can damage blood vessels, nerves, and tissue within the skull. This damage can lead to bleeding, swelling, bruising, and even death.

Many people who suffer from TBIs don’t realize they’ve suffered a brain injury until months later. They often think they’re just having “mild” headaches or migraines. It’s important to seek out medical attention immediately if you so much as suspect you’ve suffered a TBI.

Types of TBIs Suffered After an Accident

However, there are many types of TBIs that can occur as a result of a car accident. Here is more information about the different kinds of brain injuries:

A concussion is a minor head injury that happens when the brain moves within the skull.

In most cases, concussions resolve quickly without long-term effects. Some may experience lingering symptoms such as headaches, difficulty concentrating, and memory problems.

A brain contusion is a form of traumatic brain injury (TBI). There are two main categories of contusions: coup and contrecoup.

Coup refers to an injury where the force of the blow hits the side of the head, causing the brain to hit the inside of the skull. This type of contusion is often associated with severe trauma such as car accidents, falls, sports injuries, etc.

Contrecoup refers to an injury that happens when the force of the blow travels around the outside of the head, hitting the opposite side of the brain. This type of contusion is typically seen in cases of milder trauma, like being struck in the face with a fist or falling down stairs.

The most common symptoms of a brain contusion include headaches, vomiting, dizziness, confusion, memory loss, seizures, and coma.

A penetrating injury occurs when there is penetration into the skull, usually caused by a sharp object such as a bullet. Penetrating brain injuries can occur anywhere along the skull, including the scalp, face, neck, eyes, ears, nose, mouth, teeth, sinuses, and brain itself.

Athletes often suffer from anoxic brain injuries, which are different from concussions. They’re caused by a lack of oxygen reaching the brain. Symptoms include confusion, memory loss, and headaches. If you think you might have suffered this type of injury, call 911 as soon as possible.

A subdural hematoma occurs when there is bleeding inside the brain. This type of bleed usually happens because of trauma to the head.

Trauma can cause blood vessels to break inside the brain. This can lead to swelling around the brain. This swelling can press against the surface of the brain, causing pressure. If enough pressure builds up, it can rupture the thin membrane covering the brain and allow fluid to leak out.

A hypoxic brain injury occurs when there is insufficient oxygen arriving at the brain. This happens because blood flow decreases to the brain due to a lack of oxygen. A person suffering from a hypoxic brain injury might experience seizures, memory loss, confusion, headaches, vision problems, and even coma.

The most common causes of hypoxic brain injuries include heart attacks, strokes, and respiratory failure.

A second concussion or traumatic brain injury (TBI) can be worse than the original injury. This is called “second impact syndrome.”

If you suffer another head injury, it could lead to long-term effects, including cognitive impairment, depression, anxiety, personality changes, and even suicide.

Broken bones are common injuries that cause pain and discomfort. Some fractures require medical attention, while others do not. If you feel pain or swelling around a bone, you could have a fracture.

Fractures are broken bones that normally heal without any intervention. However, some types of fractures can be treated with casts, splints, braces, or surgery. In most cases, fractures heal within six-eight weeks. But others can take up to 20 weeks to heal.

A chest injury occurs when damage happens to the chest area.

Contusions are bruises on one’s chest caused by hitting something very hard. Contusions are usually smaller than bruises, and they tend to heal faster. However, sometimes contusions become infected. Infected contusions are painful and swollen. You’ll feel like you have a fever.

If you have a chest injury, then you should see a doctor. He or she will check for signs of bleeding, such as that in the lungs, which is very serious. If your doctor finds that you have a lung problem, they will probably perform tests to find out why. These tests may include X-rays, CT scans, or MRIs.

Spinal cord injuries are caused by trauma to the spine.

A person who suffers a traumatic spinal cord injury usually loses control over his or her body parts below the level of the injury. This would be paralysis. This loss of function can include movement, sensation, feeling, bladder and bowel control, sexual function, breathing, and blood circulation.

There are three types of paralysis:

Symptoms of PTSD include flashbacks, nightmares, insomnia, anxiety, depression, aggression, and emotional numbing. Some people may feel like they’re reliving the trauma over and over again. They may even start having suicidal thoughts.

People who experience PTSD often struggle with chronic pain, headaches, and fatigue. They may also have trouble sleeping, remembering things, and concentrating.

With a hip injury, you might struggle to walk, stand up straight, sit down comfortably, or even sleep properly. This makes walking, standing, sitting, sleeping, and playing sports easier. If you suffer a hip injury, you could find yourself unable to do some everyday activities.

An amputation injury occurs when someone loses a limb or part of a limb from trauma.

There are three main types of amputations:

Each type of amputation requires a different approach to recovery. For example, a person who loses a leg might require prosthetic limbs or a wheelchair.

A burn injury occurs when heat damages the cells in the body. This can happen in several ways, such as exposure to extreme heat, chemicals, electricity, flames, or radiation.

A burn injury can occur anywhere on the body, although it often affects areas with a lot of surface area, like hands, feet, face, neck, head, arms, legs, torso, and genitals.

An internal injury occurs inside the body rather than outside of it.

Some internal injuries are easy to detect, while others require additional tests. If you think you might have suffered an internal injury, seek medical attention immediately.

Seeking Justice for Serious Injuries That Can Change Your Life

A serious injury can change your life forever. Whether it’s a broken bone, concussion, or even a serious mental illness, there are many types of injuries that can occur. These injuries can affect you physically, mentally, emotionally, or financially.

If you suffer from one of the above injuries we discussed, you might want to consider filing a personal injury claim.

Our team of personal injury attorneys at Wade & Nysather in Arizona can walk you through filing claims. We provide No Cost, No Obligation Legal Strategy Sessions. Consult with us and figure out your options.