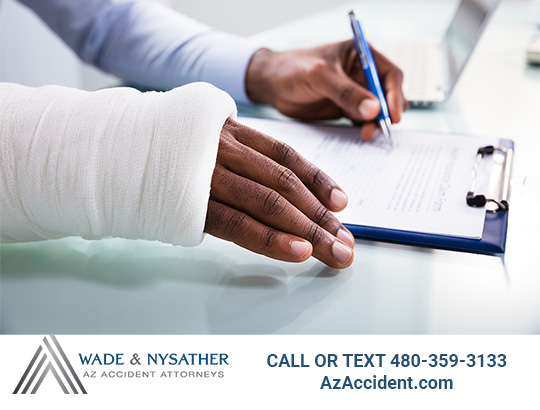 Can I Get Compensation for My Injuries in Arizona if a Car Accident Was Partly My Fault?

We all make mistakes. Whether you were speeding, texting, or looking at your GPS instead of the road, you might be partially responsible for another driver hitting you. If that’s the case, can you still get compensation for your injuries and the damage to your vehicle?

The short answer is yes. Since Arizona is a comparative negligence state, you may be entitled to compensation if the other driver shares any of the fault in a crash, even if it was partly (or even mostly) your fault. However, the amount of damages you are entitled to will be decreased by your percentage of blame for the crash.

Here’s what you need to know about comparative fault in Arizona and how it will impact your case if you were partially responsible for the crash in which you were injured.

If you still have questions or would like a free consultation, contact Wade & Nysather AZ Accident Attorneys today.

What Is Comparative Negligence in Arizona?

Typically, the at-fault driver (or their insurance company) pays the damages in car accident claims. However, since Arizona is a comparative negligence state, both drivers may be assigned some of the blame for the crash under the “pure comparative fault” rule.

Let’s say a jury determines your damages (medical bills, lost income, pain and suffering, vehicle damage, etc.) to be $100,000, but you are 25% at fault for the accident because you were speeding. Your damages would be reduced by 25%, leaving you with $75,000 in damages.

How Is the Percentage of Fault Determined in Arizona Car Accidents?

To figure out the exact percentage of fault for each party involved in a car accident, lawyers, insurance companies, and courts look at many different types of evidence, including photographs, accident reports, and traffic data.

What Elements Do You Need to Prove Fault in Arizona Car Crashes?

There are 4 elements involved in determining fault in Arizona car crashes: duty of care, breach of duty, direct causation, and damages.

The first step to proving the other driver’s negligence is easy in a car accident because all drivers owe everybody on the road a duty of care to drive carefully and avoid accidents.

The next step to proving fault is showing that the other driver breached their duty of care by driving under the influence, texting, speeding, or otherwise driving recklessly or carelessly.

After establishing the other driver’s behavior was negligent, you need to prove it was the direct cause of the accident and your injuries that resulted from the accident.

Finally, you must prove that the accident caused you damages such as medical bills, lost wages, or property damage.

What Type of Evidence Is Used to Determine Fault in Arizona Car Crashes?

The insurance company or judge will use many different types of evidence to determine each driver’s percentage of fault for the accident, including:

An experienced Arizona car accident attorney can help collect evidence that may show the other driver was mostly at fault for the accident.

What Damages Are Typically Covered in Car Accident Claims in Arizona?

Car accident claims in Arizona cover a wide variety of damages, including:

The expert lawyers at Wade & Nysather can give you a general idea of damages you may be eligible for.

In Arizona, How Much Could I Owe if a Car Crash Was Partly My Fault?

Since you can still recover some damages even if the accident was partly your fault, it’s usually worth hiring a car crash lawyer to help you get the most money possible.

What Is the Statute of Limitations for Car Accidents in Arizona?

The statute of limitations for car accidents in Arizona is 2 years, meaning you must file a civil lawsuit within 2 years of the date of the accident, or you lose your chance to file a lawsuit altogether.

Do You Need a Lawyer for Car Accident Cases in Arizona?

On average, people who hire car accident attorneys get 3.5 times more money (even after accounting for the lawyer’s fees) than people who don’t, so it’s usually worth the money to hire a lawyer.

At Wade & Nysather, we offer free consultations. We’ll tell you if we don’t think we can get you more money than you would on your own. And, since we work on a contingency fee basis, you don’t pay us unless we get you money.

Schedule a Free Consultation With an Arizona Car Crash Lawyer

If you live in the Phoenix metro area and were in an accident that was partly your fault, schedule a free consultation with the experienced Arizona car accident lawyers at Wade & Nysather. We have locations in Scottsdale, Glendale, and Mesa to serve you. Call or Text 602-547-2222